Initially, there was a simple plan: pairing photographs. The photographs were taken in random places, during random journeys of running random errands, random events, and of random subjects. The intent was to intuitively pair this randomness based on visual cues, not by specific chronology or place.

The order it somewhat follows is the geography of where these photographs were captured. Texas. Well, a little tiny corner of this gargantuan state, to be exact. The corner some call North Texas, Northeast Texas, East Texas, or Upper East Side of Texas. No matter which it is called, my Texas centers at the intersection between two important highways, US Highway 80 and Texas Highway 19, in the city called Edgewood, in Van Zandt County.

Nevertheless, I take a great deal of photographs. Random subjects, random places. I just did that out of the love of the work itself, intriguing subjects, and curiosity. Then, the curiousity started to make things became a little bit more complicated. I started wondering how certain subjects or places came into being. When, how, and why did they all start, end, or change.

So, I did some reading and research on the history of my photographic subjects, and discovered many interesting tales from bygone days. It took me wandering from century to century, to places which no longer exist, and to events that shaped the communities today. I started to better understand the subjects in my photographs and developed a deeper respect for the places and people. It helped me to see beyond the ordinary. The initial intent was not to write a history book. Historical background or facts presented -also randomly- in the book are there just to help illuminate the subjects or the places.

In pairing this randomness, two by two, spread by spread, I see things and matters that embody Texas and Texans. At least, for now it is my own view on this little corner of Texas.
My Northeast Texas.

I also found some subjects are so independent, eloquent, and almost too arrogant to be paired. So I left them alone.

I just want to keep it simple. Simple with knowledge. 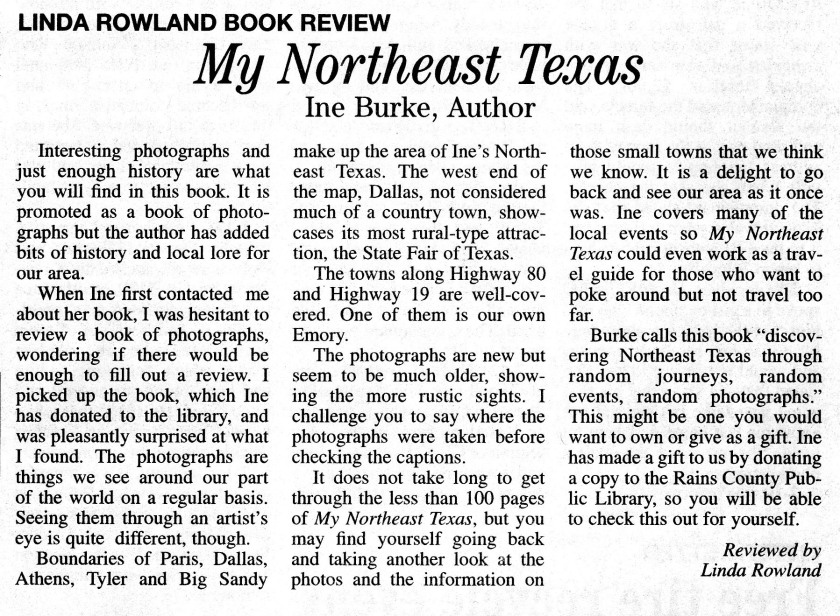 2 thoughts on “My Northeast Texas”