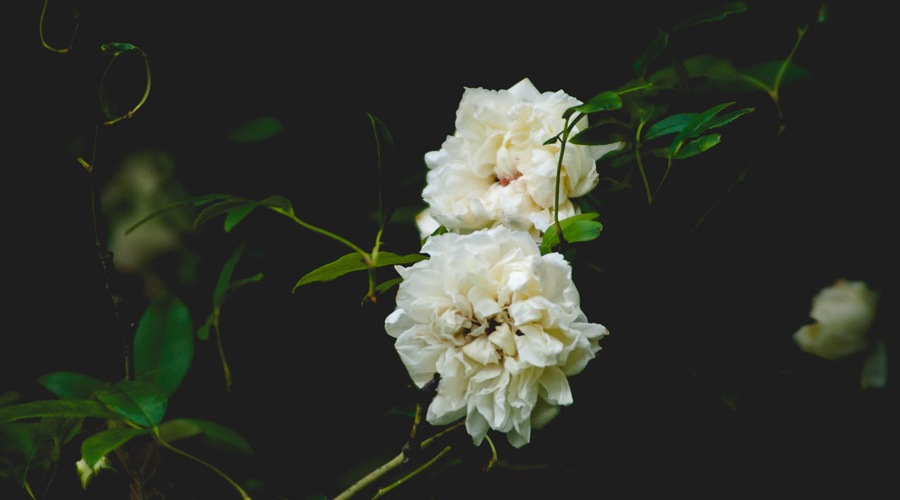 This is a photo essay about a pine-tree-climbing rose, grown and loved by The Bomar family, in Edgewood, Tx. It becomes quite a landmark when in blooms. The road where it grows by is a part of The Old Dallas-Shreveport Historic Parkway in Van Zandt County (near the Barren Ridge historical marker). The photos were taken in early spring (April 2015). Click on the first photo and follow the ‘next/previous arrow’ to read the story in sequence.

This is a photo essay about a climbing rose and the garden where it grows, in Edgewood, Texas. 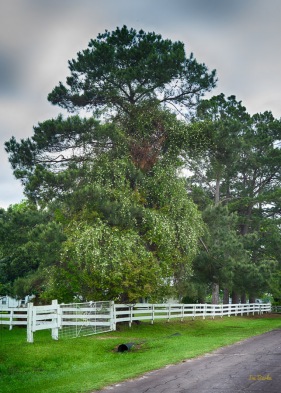 On a property along this road, which happens to be the Old Dallas – Shreveport Historic Parkway, a climbing rose and a pine tree grow together. 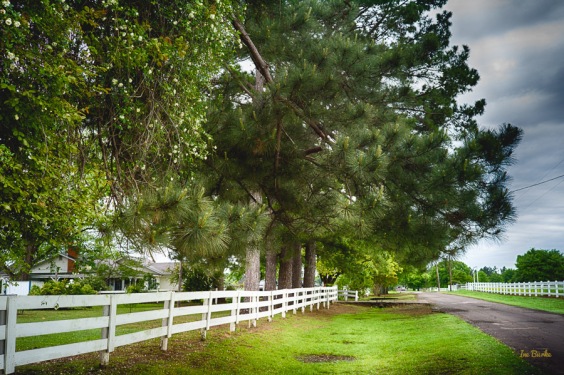 It was a serene April morning after a stormy night. Everything looked fresh and green.

The clouds were still thick with a chance for another storm.

This tree, which seems to be a white flowering tree, is actually a pine tree covered with the blooms of a climbing rose.

The rose bush is at least 76 years old. It was a birthday gift from a husband to his beloved wife when she gave birth to their daughter, 76 years ago.

The rose bush grew in Dallas. When the daughter and her family decided to move to Edgewood in the 1980’s, they brought along the bush. It was re-planted in the corner of the fence line by a small pine tree.

The rose and the pine tree grow together ever since.

When the roses are in bloom, it becomes quite a landmark along this country road.

Strands of rose stems hanging down the tree.

Branches of roses diving down the tree form a curtain of roses.

The blooms up close.

The fallen rose petals scattered on the ground

A view from inside the garden.

The owner’s fondness of white is reflected throughout the garden. 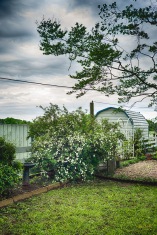 One of the birdhouses in the nooks of the garden. This place is, without a doubt, a bird sanctuary.

A Japanese maple tree sits quietly in a corner with fern on its foot.

Almost hidden from the eyesight, a birdhouse sat at the end of the fence.

The same birdhouse was spotlighted by a drop of golden sun.