“A Legacy of Faith” is a commemorative book for the 135th Anniversary of Cheatham Memorial United Methodist Church, Edgewood, Texas, published in October 2014.  I had the honors of producing the book, from researching, co-writing, and designing this 8.3”x10.2”, 130-page, hardcover book. – Click here for more info.

“The Dancing Trees” ~ photographs & short poems.  The book brings together nine photo essays capturing objects normally seen, and some unexpectedly found, in a rural farmstead and in old downtown Edgewood, Texas.  The photographs are taken by Ine Burke, short poems by Harold Burke. Published in 2013 – Click here for more info 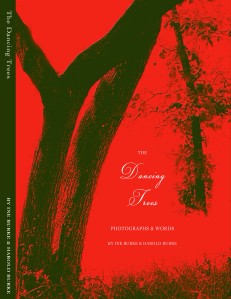 “My Northeast Texas” ~ Initially, there was a simple plan: pairing photographs. The photographs were taken in random places, during random journeys of running random errands, random events, and of random subjects. The order it somewhat follows is the geography of where these photographs were captured. Texas. Well, a little tiny corner of this gargantuan state, to be exact. The corner some call North Texas, Northeast Texas, East Texas, or Upper East Side of Texas. No matter which it is called, my Texas centers at the intersection between two important highways, US Highway 80 and Texas Highway 19, in the city called Edgewood, in Van Zandt County. – Click here for more info

“On the Edge of the Piney Woods” – Beauty is, where you find it.  You just need to know what to look for. Many of us pass by nature’s beauty every day, and never recognize it.  Sometimes, it takes a change of geographic location to reset one’s view of what surrounds us.  After taking thousands of nature pictures over the years, I painstakingly chose around 100 of them for this book.  The images, dated from 2006 to 2012, were all captured within sight of my ‘kitchen window’, in Edgewood, Texas. ~ Click here for more info.